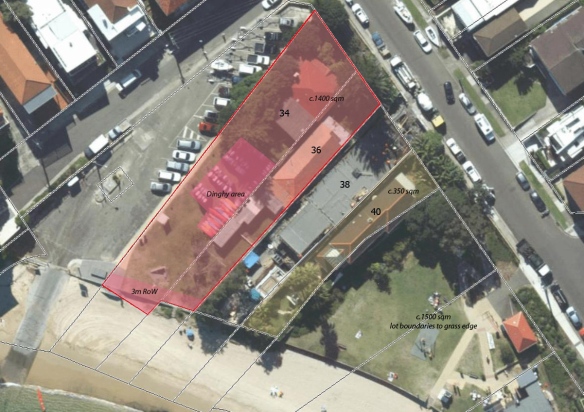 On the 10th of December 2012, once more a proposal to sell off Little Manly Beach public foreshore was presented to Councillors who voted 4 to 3 to sell it off. With the General manager Henry Wong given carte blanche in selling the land.  And once again your opinion about the environment and public amenity can stop this. A rescission motion is set for the 4th of February 2013 at Manly Council Chambers ( 7.30 pm), this has been changed to the 11th of February.

On the 11th of February Council did not rescind the sell off decision. The voting breakdown was the same as below. The motion* is spelt out below in italics: (comments in bold)

2. Council proceed to create a three metre wide right of way at the rear of 34 and 36 Stuart
Street to enable public access to the beach from the Craig Avenue Carpark; and the Dingy Storage facility located at the rear of 34 be retained as an on-going concern with existing use rights attached and requiring the purchaser of 34 to maintain the facility. And the General Manager to consult with the Heritage Committee regarding the Farrell Family memorial and anchor;

Dark pink, highlights possible conditional areas: the 3m Right of Way and the Dinghy Storage facility, however if Council does not retain ownership, these conditional areas and any other conditions will most probably be tested in the Land and Environment Court.

If No. 38 Stuarts St’s development process is any guide, the Land and Environment Court** will look to surrounding developments for precedence rather than the foreshore position, and indeed any hard fought conditions won by Manly Council in Court will then be overturned by Manly Council (under s96 modifications***) !?

The Farrell Family memorial was in respect to the the park they helped create, removing the park makes the memorial somewhat obsolete.

3. Council approach the owners of 38 Stuart Street to seek agreement for a right of way at the rear of their property to link up with that proposed for 34 and 36;

An undefined Right of Way, if it was defined and linked with motion 1 this could have be achieved, as is, this motion will almost definitely be ignored, or made meaningless.

4. Following the creation of the right of way at the rear of 34 and 36 Stuart Street, these
properties be sold and proceeds go to repay the loan on 40 Stuart Street, and the General
Manager to determine the timing for these divestment.

5. The General Manager be authorised to do all things necessary to implement the above points one to four, including the execution of any documents and the affixing of the Council Seal upon them; and

The General Manager is given Carte Blanche to sell the properties to whoever at whatever price, no public scrutiny or council approval required !!!

There is no change to 40 Stuart St., certainly no motion to demolish or add it to the existing park. With No. 34 & 36 Stuart St. as our only guide to future Council actions, we should expect that while No. 40 may get a demolish order it will never be acted upon and eventually it will be rezoned and sold off as well.

RESOLVED:
(Hay AM)
A rescission motion was lodged in relation to the above item.

The Councillors who voted in support of the motion to sell 34 and 36 Stuart St:

The Councillors who abstained for this vote:

The Councillors who voted against the motion.

You can let the whole council know your position by responding to records@manly.nsw.gov.au

All the people in the public forum of the 11th of February Council Meeting spoke against the “selloff” of the Little Manly Foreshore, in front of standing room only public gallery.